Jewel from the sea

WHAT IS A CORAL?

Coral is the product of an animal, we could almost say it’s its home.

It is formed by colonies of polyps, which build around their soft body, through secretions, a sort of skeleton. It’s a limestone scaffolding with a protective and supporting function, which assumes, over many years, the extraordinary branched shape of a tree. There are three conditions necessary for coral to grow healthy and luxuriant:

Coral has its own life cycle, like every being in the making, so it is born, grows, reproduces and finally dies. These seasons are inextricably linked to the life of octopuses, to whom 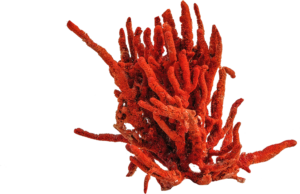 we owe its development. The small animals, during their existence, multiply and divide several times. If they feel a situation of overpopulation, they release in the sea their 3 spermatozoa which, dragged by the currents and fecundated, give life to larvae, which originate other colonies in other marine areas. At the moment when the beasts die, as if the protected walls of a castle fell, parasites creep inside the structure. These parasites begin to dig tunnels in the coral, like woodworm in wood, until it becomes crumbly, fragile and unworkable once caught.

I like to compare sustainable coral fishing to go mushrooming: branches are found in families and only the best are selected, leaving the small ones to grow.

The coral, since the times of the Greek civilization, has been fished with nets in the Mediterranean, through a technique that we could define technique of trawling which involves to tear them from the rocks.

This methodology has recently been officially banned by the European Community. Since then, coral fishing has been carried out by particularly experienced divers who, thanks to the aid of sophisticated technologies, are able to descend to considerable depths: often over 100 metres. A responsible underwater fishing like the present one is a panacea for the ecosystem and that it makes the coral harvest before it starts its destructive phase, dying, let’s say, for natural causes. The underwater fishing is, in fact, very selective; the “coral reef”, which dives into the sea, identifies the shoal, but does not indiscriminately incite it; it collects only the biggest, healthy specimens of high economic value, leaving the small ones and waiting for them to grow in the following years. Just like a good farmer, who exploits the land in rotation and leaves a field fallow to restore its fertility, so the fisherman leaves a portion of the seabed to rest in order to allow the coral to grow well. The ancient fishing, too massive, has led in part in the Mediterranean area to substantial damage to the environment and the general temporary shortage of raw material. If, on the one hand, the expedient of underwater raids has benefited nature, on the other hand we must consider the danger of the profession of “diver” and the fact that fishing with divers is infinitely more expensive in terms of time.

Corals mounted on Silver and Gold 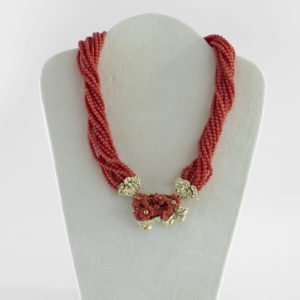 Online sale of Corals mounted on gold and silver: Coral and Cameo in Amalfi since 1940 offers a large selection of corals and Pendants, brooches, rings, earrings, cufflinks that are mounted in 18 Kt. gold and 925% silver.

Coral and Cameo is able to create your customized Coral.

This website uses cookies to improve your experience while you navigate through the website. Out of these cookies, the cookies that are categorized as necessary are stored on your browser as they are essential for the working of basic functionalities of the website. We also use third-party cookies that help us analyze and understand how you use this website. These cookies will be stored in your browser only with your consent. You also have the option to opt-out of these cookies. But opting out of some of these cookies may have an effect on your browsing experience.
Necessary Always Enabled
Necessary cookies are absolutely essential for the website to function properly. This category only includes cookies that ensures basic functionalities and security features of the website. These cookies do not store any personal information.
Non-necessary
Any cookies that may not be particularly necessary for the website to function and is used specifically to collect user personal data via analytics, ads, other embedded contents are termed as non-necessary cookies. It is mandatory to procure user consent prior to running these cookies on your website.
SAVE & ACCEPT
× How can I help you?